Suggestions for Corresponding with Prisoners in California State Prisons*

I am an attender of the Orange Grove Friends Meeting and am writing up my experiences as a pen pal for incarcerated prisoners. I’ve also included what I know of the experiences of other pen pals like me.

Benefits of Being a Pen Pal 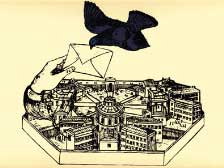 I have written to several prisoners in the last few years. It has been one of the most rewarding experiences of my life. The changes in the lives of the prisoners is obvious. Two prisoners, in particular, have really benefited. One prisoner had been involved in gangs prior to prison. He had a victim-orientation to everything that happened in his life. He now works hard to stay positive and improve himself. He attributes the change he has experienced since we started writing to seeing that it’s possible to take a positive and friendly attitude towards others. He thanks me profusely. In addition to our letters, he sends me cards that he has drawn.

The second prisoner was a year away from release when we started writing. He had been in prison 20 years and would be required to register as a sex offender upon release. He was overwhelmed by the prospect of being out on his own and having to register. I sent him information about programs that help ex-offenders, including those having to register. This helped him to get oriented. By the time of his release, he was excited and optimistic. After he got out, he sent me a beautiful card thanking me for easing his transition.

Guidelines for Writing to Prisoners

Prison Rules. Each prison has its own rules about inmate mail. But the rules are not necessarily easy to discover. In general, with important exceptions, you and the prisoner are free to write anything, even about politics and prison politics. The important exceptions are that you can’t write about gangs or anything that could be considered to contribute to illegal activity. Also, don’t enclose secret codes, glitter, or anything metallic (like a staple), or electronic.

See the separate sheet California Prison Mail Rules for more details. for more details. However, the rules are mostly common sense. I didn’t read mail rules until after I had been corresponding for a while and developed questions.

To find the rules for your prison, search on-line with the name of the prison and a phrase like “inmate mail.” You can also ask the prisoner about the rules.

Send only letters, postcards, cards, and photos. If you want to keep your life simple, send only letters or cards and other printed material. The cards can’t be decorated with glitter, anything metallic, or have electronics in them. You can enclose photos or drawings that are 8 x 10 inches or smaller. (See “Safety Tips” below about sending pictures of yourself or your contacts.) Each prison has its own rules about what can be enclosed in an envelope to a prisoner. Usually, 10 pages or less is accepted. You can google something like “inmate mail at ______ prison” or ask the prisoner if you want more detail.

Frequency of writing. I write my prison pen pals about once a month. They sometimes write me more frequently. I try not to feel guilty about this imbalance. I don’t discourage their writing frequently and express only appreciation for the letters. They’ve made it clear that writing letters allows them to temporarily forget where they are. I’ve explained to them that I don’t have time to write more often than monthly. My pen pals mention occasionally that they realize that I’m busy. Of course, if you have the time, writing more frequently would be great.

What to write. Often, you will have received a letter from the prisoner before you start up a correspondence. If you do, you can ask questions sparked by the letter. Questions about neutral subjects are good starters: where they grew up, what they do to keep busy, whether they are interested in likely activities like sports, etc.

In my case, I didn’t ask about what landed them in prison or anything that might be sensitive. Eventually, the prisoners volunteered it or asked if I wanted to know why they were in prison. I said, yes.

In my first letters, I give basics about myself like my age, gender, marital status, and affiliation with the Friends Meeting. The prisoner needs to know what kind of person they’re writing to.

Whenever I write, I’m focusing on the prisoner and what he/she would be interested in. I express a lot of interest in them and appreciation for any progress and achievements. But I also write about myself, and often include anecdotes about my family and personal life without revealing information that would identify me.

One issue to consider is whether to protect your identity or to express a level of trust by not doing so. Please see the section below on Safety Tips for more information.

Gifts. If you want to keep your life simple, don’t send gifts. If you decide to send gifts, the only gifts that you can include with your letters are stationery and postage stamps (not pens or pencils at most prisons). Prisoners use postage stamps as a form of currency amongst themselves. But prisoners, also, of course, use them for sending letters.

Each prison has its own rules as to how much stationery and stamps can be sent to an inmate in one envelope. You may be able to find out the rules by googling “inmate mail at ____________ prison” or ask the prisoner. It’s possible to send money and other gifts through merchants. See a separate write-up about gifts.

Finding information about a prisoner. The California Department of Corrections and Rehabilitation provides a service that allows anyone to look up a bit of information about an incarcerated person. Click to access this prisoner locator service.

Helping the prisoner to prepare for release. If you wish, you can help your incarcerated pen pal by informing him/her of ways in which they can prepare for release. Many pre-release services are available inside California prisons. Programs are also available for eligible prisoners to leave prison early and spend their final year in supervised living situations outside prison. Many programs, called “re-entry programs,” are also available for prisoners after release. Many of these programs also serve registered sex offenders. See the separate write-up on Prisoner Re-Entry Services, California.

I heard a report on the radio about a woman who corresponded with a prisoner who was later released. After his release, he made her life difficult. Currently, many Friends and members of churches correspond with prisoners, and I’ve heard of only these two problems. Nevertheless, safety is something to consider as you start a correspondence.

The prisoner will likely have contacts outside the prison and he/she may be released at some point. Even a prisoner with a sentence of “life without possibility of parole” may be released. Sentencing laws may change. Or the prisoner may even be found to have been innocent. Your pen pal may pose no danger nor be inclined to make unreasonable demands. But that may not be possible for you to judge accurately.

On the other hand, there is a value to communicating that your prisoner pen pal is trusted. Here is what one Friend pen pal wrote about this issue: “I had a long talk with my aunt Mary who writes to a former death row (now lifer) prisoner in Pennsylvania. She pays him visits, and considers him part of her family. She also brought prisoners from a local detention center to her home for an annual summer picnic for many years (I remember attending as a kid). Many people told her she was crazy to open her home like that, but no harm has ever come of it. Her strong feeling is that these are people who have never been trusted. By continuing to not trust them, we are reinforcing that they are not trustworthy. It’s a complex issue, and my strong feeling is that people should at least be supported in whatever choice they make on the matter.”

Here is a middle way to get you started: At first, don’t give address or phone information or your photo to the prisoner. Use the address of your Meeting House or church as your return address. At first, don’t give your last name. That will leave a single decision: whether to use your real first name and those of your family members. That decision might be influenced by how common your first name is. Later, you can decide about giving out more contact info.

If you start a correspondence by writing a Christmas card, as I did, you’ll need to make a decision about how to sign the card. If you use a pseudonym on the card, write it down so that if you get a reply, the letter can be directed to you.

Among the people in the Orange Grove Friends Meeting who write to prisoners, we’ve encountered three problems: 1) Sometimes, a prisoner stops writing, and 2) One male prisoner repeatedly included sexual innuendos in his letters to a woman pen pal. 3) At times, we’ve had a waiting list of incarcerated people looking for pen pals.

Prisoner stops writing. This happened with one of my prisoners. I had started writing to him when he was in solitary confinement and had a life sentence. For a few years, he wrote every few weeks. While he had initiated the correspondence and, undoubtedly appreciated it, he didn’t go through noticeable change over the months.

Then, due to changes in California law, he was integrated into the general prison population. And he was offered the possibility of parole. This gave him access to classes and rehabilitation programs. His letter writing became more sporadic and eventually stopped altogether for about 6 months. I wrote a letter or two during this time and, finally, he replied. He wrote that he’s very busy with his programs but resumed the correspondence. I think that I can help orient him to reentry programs for ex-offenders. But we’ll see if he wants to continue the correspondence.

If a prisoner has stopped writing and you would like to check if he’s still in the prison that you’ve been writing to, you can look this up in a Prisoner Look Up service provided by the California Department of Corrections and Rehabilitation. Click to access this prisoner locator service.

Unwanted sexual innuendos. When you first start writing with a prisoner, send him/her the sheet, “Tips for a Pen Pal Relationship That Will Last.” These tips include refraining from making sexual innuendos in letters.

Only one prisoner among the 30 or so whom we’ve corresponded with has created a problem in this area. He was writing with a female pen pal. The first step which we took was to send him a copy of the tips. The correspondence had started prior to the development of the tips. In fact, he was the reason that we developed the tips! However, the prisoner continued make veiled sexual innuendos. Giving him a male pen pal solved the problem.

*Some links may no longer work. Prisons are subject to rapidly changing laws, and services to prisoners change rapidly. The result is that Internet links in this area change rapidly. The resources in this section have been compiled by a volunteer and may not have been updated recently. Please consider the links to resources as leads. If you find that a link in the following webpages has strikethroughs and no longer works, you may be able to find a working link to a similar resource by doing an on-line search.