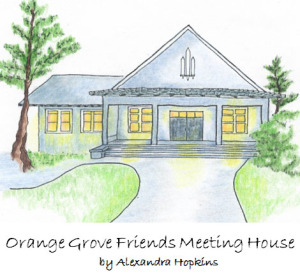 Orange Grove Monthly Meeting of the Religious Society of Friends was founded in 1907 by a group of twenty Eastern “Hicksite” Quakers who had migrated to Pasadena in the latter part of the Nineteenth Century. These Friends found a congenial home in Pasadena, where Friends of the Orthodox and Conservative Quaker traditions had already established a strong Quaker presence. Quakers of the Hicksite tradition worship in silence, believe that everyone is capable of having a direct relationship with God, and acknowledge that God may call upon anyone to offer vocal ministry in the meeting for worship.

The Quaker convictions of unity, simplicity, peace, integrity, community, and equality are derived from the fundamental belief that the Divine Spirit or “Inner Light” is present in everyone. From this fundamental belief, it follows that committing violence of any sort against another is tantamount to committing violence against God. Therefore, Quakers have played leading roles in opposing war, working for peace, promoting racial and gender equality, and supporting environmental and other causes.

In the past one hundred years, Orange Grove Quakers have actively practiced their faith. After World War I, Orange Grove Meeting members were active in support of the American Friends Service Committee (AFSC), which engaged in post-war relief efforts in Western Europe and Russia. Later, Orange Grove members were instrumental in establishing AFSC’s Pacific Coast branch.

During World War II, the Meeting served as a hostel for Japanese-Americans being sent to internment camps, and Pasadena Friends sent aid to those already interned. The Meeting members also provided hospitality and financial support to area conscientious objectors and their families. After the end of the War, Orange Grove Friends hosted families displaced by the War and its aftermath.

In 1954, Orange Grove Meeting came face-to-face with McCarthy-era repression when the state of California enacted a law requiring all tax-exempt entities, including churches, to sign a loyalty oath. Because Friends do not take oaths of any kind, Orange Grove Meeting refused to obey this law and thereafter lost its tax-exempt status. The Meeting paid taxes under protest and supported a judicial challenge to the law. Eventually, the United States Supreme Court nullified California’s loyalty law, and taxes paid by Orange Grove Meeting were refunded.

In the midst of the Meeting’s challenge to McCarthyism, Hollywood came calling in the personages of Gary Cooper and Jessamyn West, who attended Meeting in preparation for the film adaptation of Ms. West’s novel, Friendly Persuasion, a story of how a Quaker household contended with the effects of the Civil War on their family. After Meeting for Worship, Gary Cooper stayed for social fellowship. Reportedly, few of the older Meeting members recognized the actor, who was then at the zenith of his career.

During the Viet Nam War years, Orange Grove Meeting Friends protested the war in many ways. In December 1968, the Meeting provided “sanctuary” to a group of AWOL soldiers, draft resisters, and their supporters. From January to March 1969, a number of conscientious objectors lived in the meetinghouse, slept on benches, and were fed and clothed by Meeting members. Although military police and other government officials stood watch outside the meetinghouse throughout the sanctuary period, they never entered, even when invited to join the Meeting in worship.

Orange Grove Meeting members have frequently led the way in civil rights and social justice movements. Meeting members took part in freedom rides in the South, the Selma, Alabama protests and efforts to desegregate the Pasadena school system. In 1972, the Meeting acknowledged the equal rights of homosexuals and the validity of same-sex unions. In 1989, the Meeting announced that it welcomed applications for marriage between same-sex couples, and in 1990 the first such wedding took place.

Following Quakers’ long tradition of supporting both public and Quaker education, Orange Grove has been instrumental in founding five educational institutions. Pacific Ackworth Friends School (1942) and Pacific Oaks School (1945) were established by Meeting parents to provide a nurturing educational environment for community children. In 1961, Mara Moser, an Orange Grove member, established Mothers’ Club on the Meeting property to support the families of imprisoned men; Mothers’ Club later evolved into a child development and family center serving low income, primarily immigrant families. In 2001, the Friends Western School, which provides a Quaker-based kindergarten to seventh grade education, opened its doors on the Orange Grove Meeting site. In 2002, responding to the crisis in Afghanistan, Orange Grove and Claremont Quakers established a school for Afghan refugee girls in a camp in northwest Pakistan. There are now two schools in the camp, providing elementary educational opportunities to more than 500 girls.

At the time the present meetinghouse was built in 1909, members planted five stone and canary pines that have grown to over 90 feet. Four of these magnificent trees have come to the end of their natural lives and will be taken down this year. Several years ago, the Meeting planted replacement California native pines in anticipation of the demise of these landmark trees. Orange Grove Meeting strives to be equally forward thinking in cultivating and sustaining its membership. The Meeting is increasingly sustained by younger attenders and families committed to raising the next generation of Pasadena Quakers. The Meeting celebrates its proud history, while planting the seeds of the future.

The Meeting met in the homes of members from its inception in December 1907 until the erection of the current meetinghouse on the corner of Orange Grove Boulevard and Galena (now Oakland) Avenue. It was first used for worship on February 28, 1909. The meetinghouse is an excellent example of the California Craftsman style adapted for use in a religious structure. The frame construction building has a high-pitched cross-gabled roof with a broad porch spanning the facade. The simplicity of the roof line, almost Gothic in angularity, contrasts with the Craftsman touches most evident in the shingled gables, exposed rafters, and overhanging eaves. Other Gothic elements are the lancet vent treatments in the gables. A new wing (1918) to the east on the lot is well matched in materials, trim, and roof pitch to the original meetinghouse.

Click here for a wealth of information about the historical context in which the Meeting House was designed and about the Orange Grove Meeting, itself.