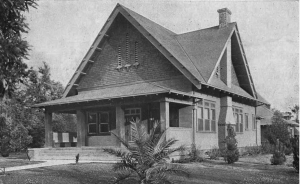 Orange Grove Meeting House in 1909, the year in which it was first occupied. It was built in 1908. The wing on the east side which houses the Fellowship Hall and kitchen were added in 1918.

Ferdinand Davis (1840-1921) was the architect of the Orange Grove Friends Meeting House on 520 East Orange Grove Boulevard in Pasadena1. Davis was from New England and was described as “a pioneer architect of Pomona” by Western Architects and Engineers (1920). Pomona is a town quite close to Pasadena.

An Architectural Guidebook to Los Angeles2  notes  Ferdinand Davis for three structures (not including the Orange Grove Meeting House). The noted structures include one of unusual design, a Seventh Day Adventist Church (1885) in nearby Laverne, which the authors feature with a photo and call “a mad concoction.”

2Gebhart and Winter, An Architectural Guidebook to Los Angeles, 2003.

Source: The above information was kindly provided by Amy Catlin-Jairazbhoy, member of the Orange Grove Friends Meeting, in a November 23, 2013 e-mail.

[The following notes, quoted exactly, appeared on the original Orange Grove Friends Meeting Website. The source of the notes is not clear. Possibly they are from the City of Pasadena Architectural and Historical Inventory, 2010, Survey Area Two: Madison-Oakland Neighborhood.]

“Belonging to the Concord Quarterly and Philadelphia Yearly Meetings in Pennsylvania, the Orange Grove Friends was organized on December 8, 1907, and met in homes of members until they commissioned the building of this meeting house. The Meeting house was built in 1908 at a cost of $3200. The first meeting was held here on February 28, 1909. Services and meetings were held on the first day of each week.

“The Orange Grove Friends Meeting House is an excellent example of the Craftsman style used in the design of a religious structure. Its inception and geographical location is representative of both the emerging social and economic influence of Quakers active in business and the community, and the general development in the north side of Pasadena during the first decade of the 20th century.

“This Craftsman influenced building is of frame construction and sits on a brick foundation. The main building (1909) has a high pitched cross-gabled roof with a broad porch spanning the entire facade. The simplicity of the roof line, almost Gothic in angularity, belies the Craftsman touches most evident in the shingled gables, exposed rafters, and overhanging eaves. Other Gothic elements are also seen in the lancet vent treatments in the gables. Fenestration is predominately 1/1 double hung sash windows with transoms. A chimney with intricate brickwork rises from the west elevation. A new wing (1918) to the east on the lot is perfectly matched in materials, trim and roof pitch to the original meeting house.”

Click here for a wealth of information about the historical context in which the Meeting House was designed and about the Orange Grove Meeting, itself.

Note: The Meeting House has been found eligible for Historic Designation in the National Register of Historic Places.