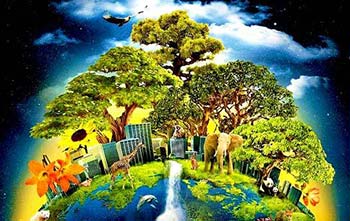 Inspired by a leading of Gracia Fay Ellwood, in 1992 the Animal Kinship Committee, an ad hoc committee originally called the Animal Husbandry Committee, was approved by Orange Grove Meeting as addressing a legitimate concern. In the early years, Animal Kinship members took action in various ways:

For the last ten years, communication of our values to others in our Meeting has focused on preparing, under the leadership of Kate Carpenter, tasty vegan meals at gatherings to which all members and attenders are invited. We also continued to cook for Union Station guests at times and expanded to occasionally cook for Quarterly gatherings. In addition, we are again placing books on the Animal Kinship shelf in the Meeting library.

Verbal communication of our values became chiefly focused on outreach. We published articles and a letter in Friends Bulletin (now Western Friend) and Friends Journal. The Journal article was later re-written to address other spiritually- and religiously-inclined people as well as Friends. We published it as a pamphlet entitled “Are Animals Our Neighbors? Taking the View From Below.”

We network with other organizations concerned about animals, staffing tables at conferences and fairs.

In 2004 we launched a monthly on-line journal entitled The Peaceable Table. In 2014, thirty of the editorial essays from past issues were edited and gathered into a book entitled Taking the Adventure: Faith and Our Kinship With Animals. The OGMM Meeting assisted us with funds for this project.

Because our expenses are paid mostly out of our own pockets and from donations, in 2010 we formed a non-profit organization which offers tax-deductibility to our donors. This non-profit is called “Quaker Animal Kinship.” We also continue as the Animal Kinship Committee of Orange Grove Meeting.

As a committee, we meet on the fourth Sunday of each month at 1 pm. Feel free to join with us for a delicious vegan meal, our committee meeting, and fellowship. Contact Kate Carpenter at quakeremail@gmail.com for more information.